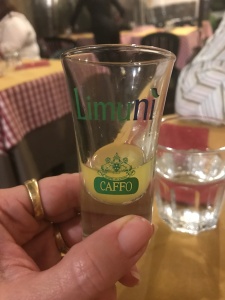 ‘When are you leaving for your trip?’ Tomorrow. This evening. In a couple of hours. The answer does not matter once we are less than 72 hours from departure, the next comment is the same: ‘And why are you so calm?’ Usually uttered in a high pitched, half panicked voice and horrified face.

But I have learned over the years that the only things you really need to travel successfully are: a passport, a credit card, and a change of underwear. Everything else can be procured. I can remain calm.

And then they ask: ‘how long are you going for?’ This is a tricky one. ‘7 weeks’ was the answer for this trip. Reactions vary and they but tend to veer in the ‘are you out of your mind, how can you walk away from your life for that long?!?!?’ direction.

Well… this is the third time we leave on an extended trip. The first two were 3-months long, so 7 weeks does not seem daunting at all. Perspective is everything.

I had already spent a couple of months looking at maps, reading trip reports, and obsessing over travel guidebooks until I was happy with an itinerary: 2 weeks in Rome, train to Naples, ferry to Capri, a few days in Amalfi and then a long road trip starting in Puglia and progressing into the Marche and Umbria. But since trip planning is my guilty pleasure, no problem here.

The emptying-of-the-fridge was accomplished without problems, though dinners for the last 2 days looked as if they had come out of one of those cooking shows where you get a basket full of obscure and incompatible ingredients.

In the past, the hardest and most stressful part of extended travel was procuring a cat sitter for our babies. This time I was incredibly relieved when one of our previous sitters (a college kid in our neighborhood) said she would do it again. Score!!!!

Oh… and I closed on the sale of what used to be my ‘burden’ house two weeks before leaving. Stress level went down to negligible. Staying calm was easy.

The packing part was not supposed to be bad… until I realized that (a) some of my clothes were looking a bit over used and (b) remembered that my trusty and faithful travel shoes were so worn that they had become slippery.

Should not be hard, just go on a shopping spree, right? Well…. First, I am NOT a shopper and to make matters even more complicated, in January I had committed to a 1-Year No Purchase challenge. But then, I could not really go to Italy of all places looking frumpy. Well, I could, but I did not want to. So at the end I struck a bargain with myself: I would only replace items, not add. Yeah, the mind games we play with ourselves…

Easier said than done. The clothes part was sort of OK. Replaced the black slacks, black short sleeve, white short sleeve, and the black long sleeve; all with minimal effort. The shoe part though….ugh! That took at least 7 trips to various malls over several weeks.

For at least 4 years I had traveled with the same two pairs of Sketchers: black slide-in closed flats with memory foam insoles, and beige sneaker-like/but not quite shoes from their Go Walk design (I do not like wearing tennis shoes when I’m not exercising). They were both the most comfortable ugly, unsexy as h@ll, pairs of shoes I have ever owned. I could not find anything similar.

At the end, I gave up on ‘fake’ sneakers and bought a pair of ‘real’ sneakers from Nike in a nice and rather elegant nude color. The cherry on top was that I had actually wanted to buy something from Nike for a while for two reasons: their support first of Chris Mosier (transgender triathlete) and then of Mo Farah (a 4-time gold medalist, Somali marathon runner, living in Oregon) during the infamous ‘Travel Ban’. So, one point for the Nike advertising team, they made a customer out of me.

The other pair of shoes came from a ‘comfortable shoe’ specialty store (Oy!), and they are black Mary Janes which are so ugly that they come out at the other end of the spectrum into having ‘distinct personality’.

We do a LOT of walking during our trips so you will read more about this purchases over the following weeks.

Then everything was settled and done, and it was time to leave. BFF gave us ride to airport and 15 minutes later we were sitting at the gate. Ridiculously early, as I had made allowances for the Easter Weekend crowds that turned out to be nonexistent. 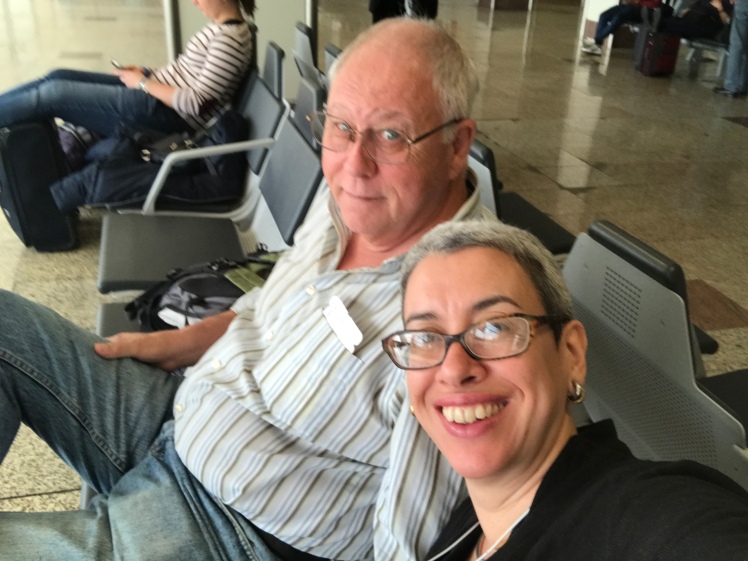 Our flight from San Juan to Madrid on Air Europa was ok. Food was edible, USB outlets were provided and I watched the final 3 episodes of  ’13 Reasons Why’. BTW, wow, what a powerful series! Should be watched by teens and anyone that has teens in their lives.

We had a 4 hour layover in Madrid and a 1 hour delay before we could board our connecting flight to Rome. Everything seemed to be Ok until we realized that we had gone out to wrong baggage claim area (another flight from Madrid had arrived minutes before ours and that was the one we –and most of the people in our plane- saw). We go out and find our driver (pre booked by the apartment rental person) and tell him he needs to wait another ‘cinque minuti’ for us while we sorted out the luggage situation. He looked exasperated but there was nothing we could do.

The next step was to ask the nice information lady how to get from T3 to T1 baggage claim. Yeahhh…. Go out, walk until you see the T1 signs, go up to departures, find the staff only entrance, plead your case to the security officer, go through the security check, go down to baggage claim and get your luggage. A bit overwhelming for jet lagged brains. But we managed.

Our driver zigzagged at high speed while he texted and navigated the maze like streets of the Trastevere, the area of Rome where we will be staying. At the end he gave up on finding our tiny street in a semi-pedestrian zone and parked the car. ‘Now we walk to find it’. Ooooookayyyy. Fast paced walking with luggage in tow followed, but he did take us to the right door.

The apartment was ready, and closely matches the pictures posted on AirBnB. Got a quick intro from the guy that received us, we dropped everything and went out to find something to feed our starving selves.

I had no dinner plan as it is hard to know beforehand what jetlagged bellies will want upon arrival, and the area is known to be full of tourist trap restaurants but we were hungry and ready to drop. So I left it up to C to pick a random place (he is the Restaurant Whisperer): Ristorante da Cencia was his choice.

If I had read the TA reviews beforehand, I would not have gone in, BUT it turned out to be not bad at all. Of course, two bottles (yes, we drink a lot and if you are going to read along, you need to get over it) of rosso della casa will make a long way to make things seem better. We had Cacio e Pepe (loved it) to share as primi, and as secondi I had a Saltimbocca a la Romana (very good), and C had Trippa a la Romana (really good!). Complimentary shots of limoncello were served at the end.

Half drunk, super full and extra tired, we went for a little stroll around and made our way into the Piazza di Santa Maria del Trastevere. Being Good Friday, the church was open for the candlelight vigil. Impressive! The most auspicious beginning for this adventure.

It would have been a great night to venture out further but we were wiped. We went back to the apartment and crashed. I opened my eyes wide awake at 4:45am local time and started writing this. C is snoring away.

I might need to wake him up soon. I’m starving and there is Good Food to be had! 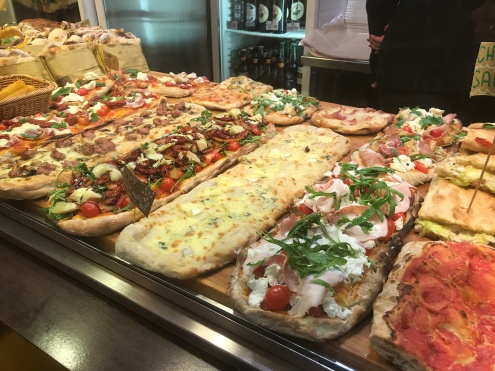 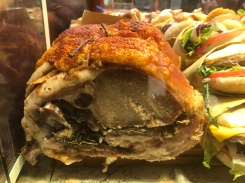 2 thoughts on “Why are you so calm? Getting Ready to Travel”