Having managed to sleep until the much more respectable hour of 7:00am, I was ready to tackle the day. But C wasn’t even stirring. So, once again I spent a couple of hours typing away… BUT this time I had plenty of coffee to drink so the day was already going much better than yesterday.

The plan for the day was to head in the general direction of Piazza Navona and hit the church of Sant’Ivo alla Sapienza during its very limited opening hours (Wednesday and Sundays 9:00-noon; basically for mass). C rolled off the bed around 9:30am so my plan to loudly drop a few pots and pans into the sink did not have to be put to into action.

Breakfast (brunch?)….OMG! Just unwrapping the lovingly cut and perfectly laid slices of prosciutto and bresaola was an experience. At the time the vendor was preparing them I had only a passing thought that it had taken longer than necessary, but I was happily chatting and admiring all the goodies and did not mind at all. Now I know why: these paper thin, actually see-through, slices of meat were the work of a master craftsman.

And then there was the flavor. The absolute pure, distilled essence of cured meat. Heavenly. You know how when people say that ‘something just melts on your mouth’ you always think that they are exaggerating? Well, these cuts did disintegrate in your mouth. Trust me on this one.

Oh, and there were the cheeses! Delicately pungent (what an oxymoron!) ‘hard’ gorgonzola ripe enough to spread slightly (another one!) on the bread. The tasteless fontina we have back at home should just quietly die in shame for daring to call itself by that name, the flavor in this one was intense! I had visions of sticking slices of it under a raclatte oven…

It was almost 11:00 by the time we left the apartment and crossed the Tiber (Tevere) river over the Ponte Sisto into the city center. What looked from distance to be an Easter Parade turned out to be the last stragglers from a big political marching protest. It was interesting to watch, truck with bluegrass band in straw hats (WTH?!?!) and everything.

We made our way into the Campo di Fiori where the grayish skies started to drizzle. So we amused ourselves by looking at the vendors and restaurants scrambling to set up their umbrellas. Apparently a well-practiced and finely-tuned community effort.

The rain stopped after a few minutes and we advanced into Piazza Navona. This is one of the places that take my breath away no matter how many times I have seen it for the ‘first’ time. Few large spaces are as elegant and well balanced as this piazza with its three fountains and the incredible façade of Sant’Agnese in Agone as a backdrop.

But noon was fast approaching so we needed to hustle and get to our destination, the church of Sant’Ivo alla Sapienza. The main feature of the building its corkscrew lantern, a masterpiece of 17th century Baroque architecture by Francesco Borromini. The church seems to be embraced by the Palazzo della Sapienza’s wonderful courtyard constructed by Giacomo della Porta.

I think that the courtyard and church façade can be seen during longer hours, but what I really wanted to see was the inside of church. Though the main event is the exterior, the marvelous dome did not disappoint seen from the inside. Mass was still being said so we were not free to wander around the small, star shaped church. But it was enough to experience the powerful verticality of the honeycomb dome. Outstanding! (Though my pictures seem to have disappeared!!!!)

The prime mission for the day had been accomplished.

We exited and walked behind the palazzo to the front of Sant’Eustachio where there is also a great spot to observe Sant’Ivo’s lantern. Since my creed is to leave no open church unseen, we stepped into Sant’Eustachio elegant interior for a few minutes.

Next stop was the Pantheon. Which I did not actually plan to visit but how can one walk past this masterpiece and not go in? Well, of course, the queue to get in would be a good reason not to, but C wanted to go for it and it turned out that the line moved so quickly that we were in within a few minutes. This was around the time the crowds started getting tight.

What can I say about the Pantheon that has not been better expressed already? Nothing. I’m humbled by it.

And then C asked about the bar we used to hang out the last time we were in Rome. That was not in The Plan for today, BUT since now I have left my Trip Nazi days behind and loosely follow A Plan, I said ‘sure, let’s go find it’.

It did take a few wrong turns, asking, map consulting and wandering through streets of Rome we had not seen before but we wound up where we wanted, by the church of Santa Maria della Pace. The bar we had hung out was not there anymore but the scaffolding that had covered the church across from it 8 years ago was also gone. One more church to visit!

With an outstanding curved façade from the 17th century built by Pietro da Cortona, this small church is a little jewel. The inside houses the Chigi Chapel with frescoes by Raphael among other important period pieces. But the main attraction is not the church itself but the Chiostro di Bramante in the monastery next to it. Indubitably a landmark piece in Renaissance design and Bramante’s first commissioned work in the Eternal City. 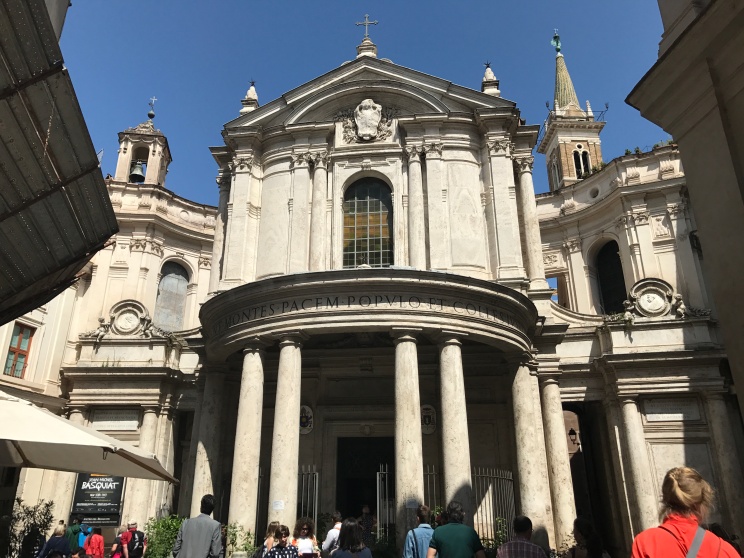 AND it houses a nice little café where weary souls and feet can restore their enthusiasm with a few carbs and the beverages of choice (in our case two beers) for a reasonable price given the location. AND it is a peaceful reprieve from the madness and mayhem of central Rome over a Holiday (NEVER AGAIN!!!!).

So far things had gone exceedingly well, but when I said that maybe we could take one of the walks described in the Michelin Green Guide to Rome (my travel bible) on our way back home, C looked a bit perplexed and said ‘but we haven’t seen the fountain!’. Oooookaaayyy. The Fountain. I should have spoken up, because I KNEW what would follow.

And I was NOT mistaken. By the time we made it past the Pantheon and into the restaurant row, it was almost full body contact crowds. Nothing to do but grab the handbag tightly and move along with what will always be remembered as the Easter Parade, or maybe the Easter Procession would be the more descriptive adjective. Slow, step by step, movements conductive to reflections on all the sins that led you to be doing this march in penance. 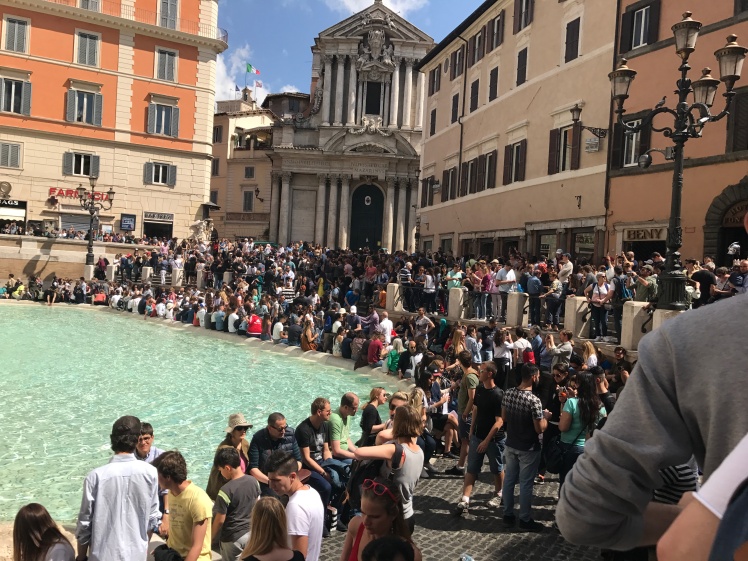 The Fontana di Trevi was recently revealed in all of its magnificent restoration. It is an outstanding piece or art. When you can actually see it. Which was not exactly the case on Easter Sunday. Going down to water level would have required engaging in bodily harm. No, thank you. We will come back and throw in our coins at another time. Perhaps 4:45am when I cannot sleep.

Even the attempt to escape the drone of the crowd proved a bit overwhelming with the constant droning of people, as our route back home took us across Via del Corso. When we walked past the Church of Saint Marcello and saw the humongous banner ‘advertising’ their ‘Crocifisso Miracoloso’, we had to go in and see.

This is the kind of thing that blows my mind about Rome. In any other smaller city or large town, a church like Saint Marcello, with excellent architectural components and containing amazing pieces of artwork, would be a pilgrimage site. But in Rome, with its dazzling masterpieces, it is destined to languish as a tertiary site (if even) where only the hardiest (or weariest) tourists will ever step in. Oh, and yes, there is a crucifix that survived a 15th century fire that destroyed that church.

It might not be really necessary to mention that they had a sale on Holy Water. 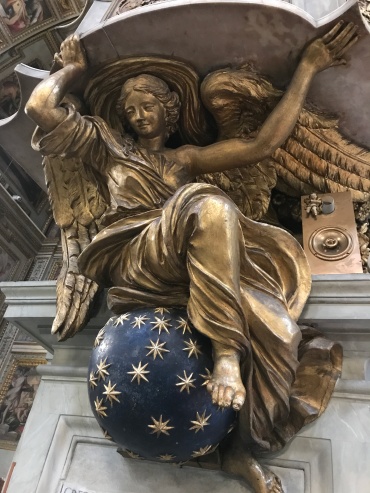 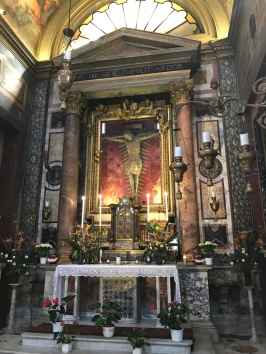 After that we just dragged our weary feet and fought our way through Piazza Venezia, across the Jewish Ghetto and back to the Trastevere. We stopped at a bar for a recovery Aperol Sprtiz (3 Euro Happy Hour at Cave Canem in Piazza de San Calisto; great spritzes, awesome people watching, dismal service…. we might just become regulars) and then headed back home to relax and cook dinner.

I’m happy to report that the cannelloni from the Sorelle Pirras turned out pretty good, and the thin green beans from the market were just plain delicious.

2 thoughts on “The Easter Procession a.k.a. the ‘Off Season’ in Rome”