We actually skipped breakfast at ‘home’ and were out and about before 10:00am. We were not really in a rush, we just wanted to save our appetite for the long awaited meal we would have for lunch. The sky was gray and it did not take long for the first few drops of misty rain to fall.

There was a palpable quietude all around us. Streets were mostly empty except for the last few vendors delivering to restaurants and the cleanup/garbage collection crews finishing up along Via Lungaretta. It felt like the City was letting out a big sigh of relief as the last of the holiday weekend crowds disbanded and headed back home.

We stopped in a bar for coffee, cappuccino for me and machiatto for C (he is never satisfied with what he gets and he should just get a cap, but he won’t because he thinks it’s a girlie thing). I was also happy to find some baked dough tomato ‘bites’ which were tasty but not overfilling.

Breakfast in Italy is not my thing…actually, it’s just not A Thing. Just need to accept that and move on. One of the things I luuuuuuuved about Greece and Portugal (and Spain to a lesser extent) is the abundance of drop dead delicious savory pastries available at all times of days, including breakfast.

The weather was museum perfect (gray, rainy, cold, and blustery) so we (I) shifted things around a little bit and we went first to the Galleria Doria Pamphilij. A museum that had been on my list for a long time. Still privately owned and inhabited by the Doria Pamphilij Princess and her family, this humongous palazzo houses an impressive collection of paintings and sculptures.

I’m a sucker for historical residences, so, yes, I liked it. BUT, having said that…. The 1700’s are not my favorite period in European painting, and this collection has a LOT of that. There are masterpieces among the art showcased but I found it hard to overcome the visual overloading caused the sheer volume of paintings on each wall.

We took the ‘tour’ of the private apartments. Which means you get handed ‘The Most Annoying EVER Audioguide’in English (silly scripted bantering and babbling with little actual historically or artistically relevant content) while the tour guide has a very interesting discussion in Italian with the other (single) person on the tour. The guide’s English was not great and I do understand Italian (and Art terms) enough to follow along in the spoken descriptions, so this was not a big problem.  My issue with this is that venues should not SELL tours in ANY language if the guide is not going to be proficient enough to deliver the entire thing successfully.

I also did not love the way the paintings were displayed in the main galleries. This is a matter of personal taste. BUT there are some really good paintings and sculptures to be seen, you just need to spot them.

Having said all this, I liked the Doria Pamphilij very much, but I’m not going to wax endless praises onto it. As a private collection it does hold world-class status. And I’m a sucker for Caravaggio… so do your research, know what to expect, and take your time to enjoy what you see. 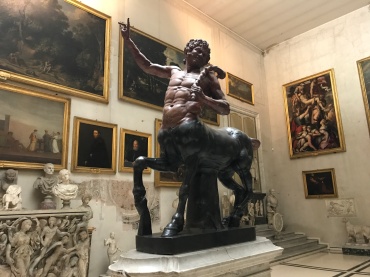 Would I recommend it? Absolutely. Especially if you love Italian and/or Late 17th/18th century Italian painting. Would I do want to see it again? Maybe not.

In my agenda I had three churches identified as ‘to do’ in the list for today. Though the sun had not come out, the rain was holding, so we were free to go and explore. And since everything was rather in close proximity, I prioritized by ‘need to see’ instead of physical nearness.

This is how we wound up first at Santa Maria sopra Minerva (St Mary’s over Minerva’s Temple), Rome’s only Gothic church. Chapterhouses of the Dominic Order in Rome. This church housed the offices of the Inquisition. Whichever way you feel about this… I’m a non-practicing Catholic and a Hispanic/Latin American Woman. Yes, I have feelings/issues about the historical role of the Dominic order, but we can discuss that some other time.

This is the church with the elephant carrying the obelisk on its back in front of it, right next to the Pantheon.  This never ceases to amaze me! You run from one 1st tier attraction in Rome to another, while never even realizing that you are less than 50m away from other, lesser known but not less impressive, marvels of architecture and art. 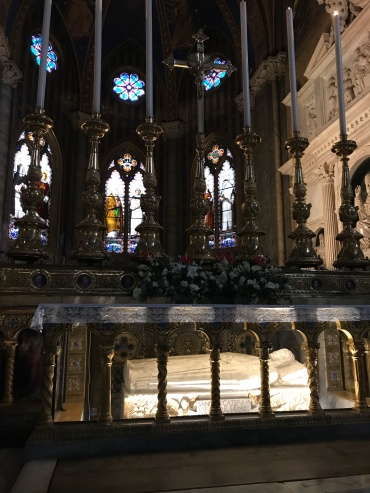 It contains the sarcophagus of Saint Catherine of Siena and it is a veritable who-is-who of Renaissance artists.

What an elegant beauty!!!! The ceiling is ultramarine blue behind gilded reliefs. Have I said that I’m a BIG sucker for Gothic churches? I am. So, yeah, WOW. Look up the wiki description. Absolutely worth every moment spent in it. The frescoes in the Carafa Chapel by Filippo Lippi are worth a detour on their own, in my (not so humble) opinion.

From what I had read, the cloister was supposed to be open for visits during limited hours. So I –was-within those limited hours. It was not open and apparently it has not been open for visits for a long time. As in ‘you need to request a visit from the archdioceses by email and await their response’ closed. Bummer. Priest could have just let me peek in around the corner.

It was time to head back to the next church on the list:  Chiesa di Sant’Ignazio di Loyola in Campo Marzio. The secondary church of the Jesuits in Rome after Il Gesú. I was on a roll. It also contains serious artwork. 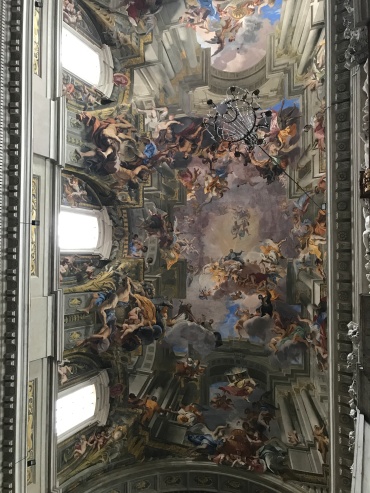 One of its most impressive features are the frescoes in the faux-cupula. It is interesting to stand in the circle marked on the floor to see the full perspective illusion and then observe how it changes when you move past the altar. The frescoes by Andrea del Pozzo are impressive.

We never made it to the third church we in plan. We were getting tired and it was time to go plead and cajole to  see if they would advance our 2:30pm reservation at Armando al Pantheon to 1:15pm.

Eight years ago, I had tried to eat here. No availability to be had over the 4 days we were in Rome at the time. All my research pointed out that this was still a place to go for serious and traditional Roman cuisine. So I had given in and made reservations for lunch. I don’t know how it works for dinner, but since the place is tiny, there never really was a full turnover during lunch service.

We had a coratella d’abbacchio (young lamb’s heart, lung and liver) to start. It was incredibly tasty. We opted to share a primi piati of their special: tonnarelli with guanciale and fava, topped with cheese and pepper, the kitchen was kind enough to bring it out already separated into two plates. The extra olive oil dressing took a second or two to get used to, but after that it was scrumptious. 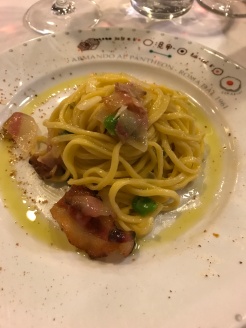 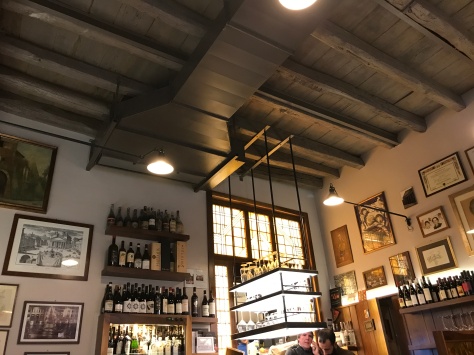 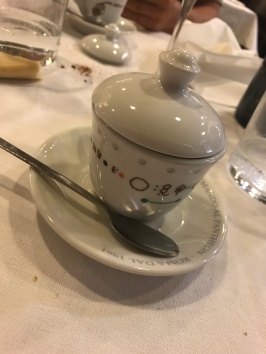 As secondi, I had an absolutely fabulous and incredibly tasty Faraona (guinea-fowl) stewed with olives and porcini mushrooms. I would order this plate again within half a heartbeat. C had Saltimboca a la Romana which I never tasted but he said afterwards that it was also really good.

So even though we (I) had held sky-high expectations about this meal, it still turned out to be a great experience, and one I would be happy to repeat any day. A big sigh of relief.

After that we just wobbled back to the apartment and vegetated around until it was time to go to bed.