I was half asleep when the alarm went off. There are so many things wrong with this sentence! Alarms have no place within vacations. But, to be fair, the alarm was set for 8:00am. So it wasn’t exactly  the crack of dawn. But it meant that we had to haul our butts out of bed and get moving because we had a (paid) reservation for a tour at 10:30am. Ok, it wasn’t like we could not have a relaxed breakfast and still make the walk across town in time without breaking a sweat on a chilly but bright blue skied morning.

That was how we found ourselves around the Trevi fountain at 9:30am. From the corner before, it looked (and sounded) like it would be blessedly empty. It kind of was….because it was blockaded off and the cleaning crews were collection the million coins thrown in during the night. So second time there and still didn’t get the chance to throw in our coins. Hoping third time will be the charm. 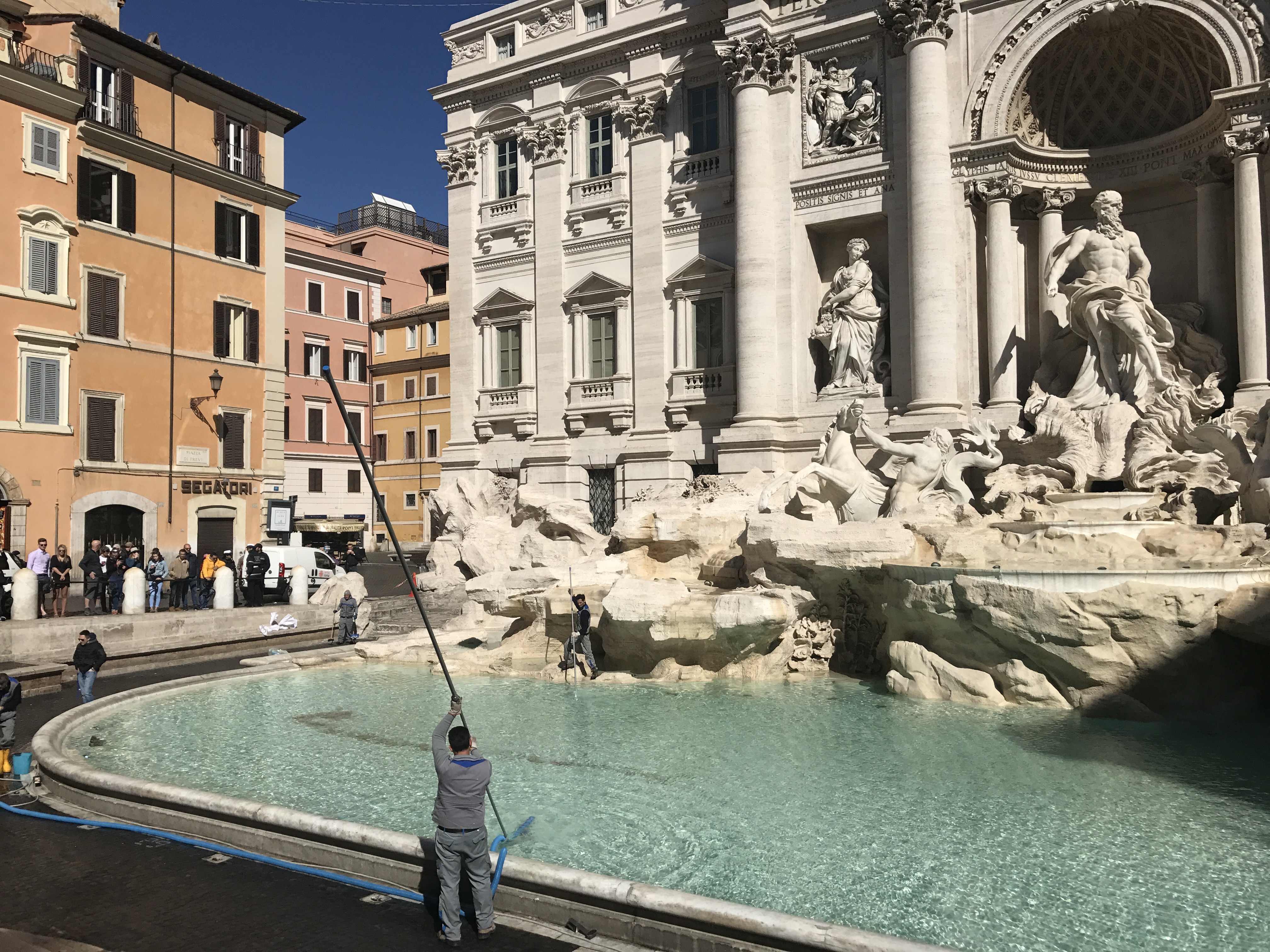 Up the hill and up the stairs we went, to the Palazzo del Quirinale. Italy’s equivalent to the White House making a very loose comparison. Reservations are required in advance –I’m assuming a basic background check takes place- and IDs are verified against the list before entering. I made them online about 2 weeks in advance. Their website was not hostile.

Notice that I’m not saying ‘user friendly’ or ‘fairly easy to use’, but in dealing with foreign websites any transaction that ends with a confirmation receipt can be considered ‘not hostile’ at the very least. I had two things going for me with all the online reservations I made: Spanish is my native language and I did take a semester of Italian some years ago. I scrape by. I lol’ed many times when the only effect of pressing the ‘British Flag’ button for the English translation was to change the titles on main menu, leaving the content in the original language.

There are two tours of the Quirinale Palace, a free one where you see the main floor and the ‘artistic itinerary’ where you also see the gardens, the Maderno masterpiece staircase that was the inspiration for the Bernini and Borromini staircases in closeby Palazzo Barberini, the carriage museum and the china collection for a very reasonable 10€ fee. All tours are only given in Italian.

I loved it. All 2.5 hours of it. LOVED IT. Well. At least until the last half hour of it when we went to see a document exhibit focused on the more modern Italian politics, and our feet were tired. Also at that point we changed guides and the new one spoke so fast I could no longer get anything of what was being said. 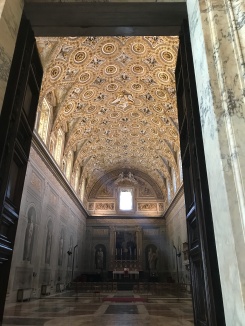 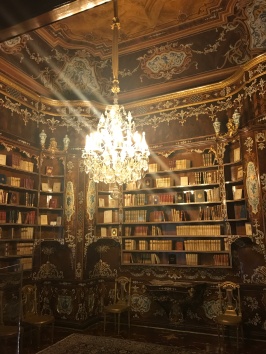 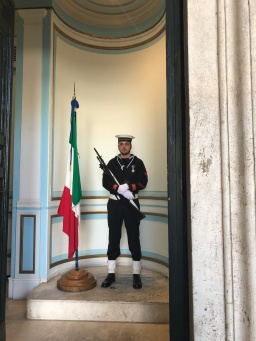 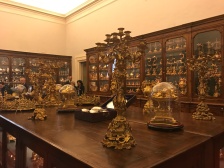 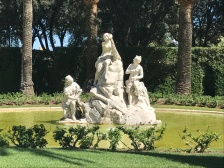 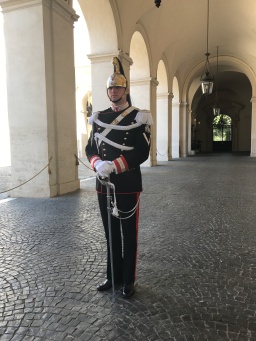 The state rooms are beautifully grandiose; just the amazing display of Murano chandeliers are worth the visit. There is a ‘secret service’ guy going with the tour and constantly herding in the stragglers back into the main group, but the overall pace did not feel ultra rushed. Yes, I might have liked a little longer in a few of the gorgeous rooms, as well as to observe the incredibly intricate carvings in the carriage house, but it was still ok.

The Quirinale hill is ground zero for one of the greatest artistic feuds of all time: Bernini vs Borromini. Within a few streets there are many of examples of their work.

It was too late, by the time we went across the street to the church of Sant’Andrea al Quirinale, the doors were firmly shut and we could only admire Bernini’s outstanding façade.

We had fallen into the ‘pausa’ black hole. Most churches, small museums, and some small businesses, close for 3 hours anytime between noon and 4:00pm, the period varies among sites and some leeway has to be given. Do not expect the doors to be open on the dot at the announced hour.

The door to San Carlo alle Cuatro Fontane was still open at 12:59pm and we managed to sneak in, but the little cloister and crypt were already closed. We would have to come back later.

We kept walking a few steps along Via del Quirinale when C spotted a group of men in business suits going through an unmarked door. He peeked in, it was a restaurant. I have mentioned in our past trip reports that C has a knack for finding hole-in-the-wall, shacks, and non-descript restaurants. I spend hours doing research and then he just finds them. Well… it works.

So this is how we came to eat lunch at Ostaria Contemporanea, somewhat associated with Caffetaria Borromini. The place is not small and within 20 minutes most of the tables were full of government-official-looking people.

We did not want to stuff ourselves, we were not awfully hungry and furthermore, we wanted to avoid the post prandial coma that inevitably follows a four course Italian lunch. We ordered an aranccini from the fried menu, a tonnerelli carbonara with zucchini for me from the primi section and roasted veal slices from the secondi for C. Thank God we did not order anything else! Each plate on their own was enough to be considered a ‘big lunch’. 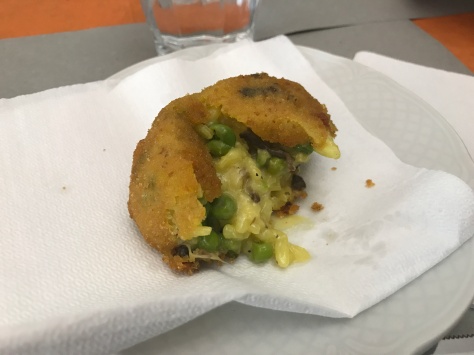 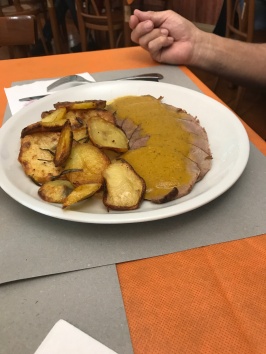 My carbonara was deliciously creamy and eggy in all the right ways. They were not shy with the pepper, which I like. C’s veal had a mustardy sauce and was served with awesome roasted potatoes, no contorni needed. We both ordered a glass of wine and then a third one to share as we lingered a bit over lunch, it was interesting to watch all the ‘real’ people go in, out and about their lunch. We were brought two glasses anyway and charged only for the third.

With a 1.5 l bottle of fizzy water and two coffees, the bill was €27. The Restaurant Whisperer had struck again.

Adequately refreshed and not excessively stuffed, we could take on the next item on the list while we waited for the churches to reopen. We made our way halfway down the hill and went into Palazzo Barberini. This is a Baroque palace commissioned to Carlo Madero by Cardinal Barberini when he became pope Urban VIII and finished by archenemies Bernini and Borromini.

It is not a huge collection and it has its great pieces, but this is a museum for die-hard fans of eithr painting or architecture. But to me, just to see the Bernini and Borromini staircases was worth the admission ticket. I liked it, C was getting tired and museumed out. 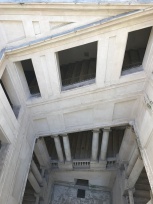 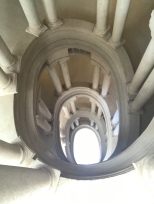 After spending about an hour at the gallery, we went up the hill, back to the ‘four fountains corner’ and into Borromini’s church of San Carlo alle Quatro Fontane for a more leisurely visit. Not that there was much more to see, it is indeed a tiny church. Lovely and perfectly proportioned, but very small. The cloister is also small and the crypt is entirely skippable. So 15 minutes in and out. But the façade and its interaction with the four fountains are worth the trip uphill.

Backtracking on the same street brought us back to Bernini’s Sant’Andrea al Quirinale now that it was open. I was not expecting the golden extravaganza. Wow. So glad we came back!!! The incredibly elegant dome is gilded and dotted with white putti and saints; they are still not outright sculptures, but are certainly in the process of breaking out from the ceiling. You can see in this church the beginnings of Bernini’s no-holds-barred sculptural epitome that will climax at Santa Maria della Vittoria. 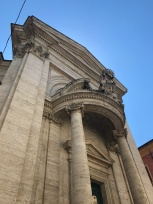 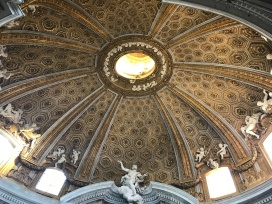 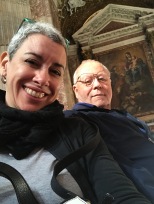 And there was a wedding ceremony taking place (in English) so we waited it out until they said their vows and kissed. We kissed too. C can be romantic.

After that we just made our way slowly home and to grocery store. Where we made store-bought prosciutto tortellini in a cream sauce that turned out pretty darn good. And drank lots of wine in the process. Then we crashed because we were beat. For a ‘lazy vacation’ we seem to be walking about 6 miles too many per day.