Yesterday, the Lazy Day thing had backfired, but today, I did not even look at The Spreadsheet. Hey, the fact that I’m a recovering overplanner does not mean that I don’t have A Spreadsheet….I just don’t feel compelled to follow it (most of the time) to the dot. Besides, 95% of my ‘must do’ activities had been included in Week 1; and now, during Week 2, everything else would just need to fall into place on its own.

So we had coffee #1 and coffee #2; even though it is instant coffee, it’s still Nespresso from Italy with boiled water brought through old Roman pipes, so it will still be better than the exact same thing served at home. Placebo Effect. I know you are supposed to go down to the bar and have a cappuccino standing up.  But you have to wear real clothes to do that… not conductive to a Perfect Lazy Day.

A quick consultation with C; let’s just have a brunch with the leftovers we have. So  I caught up a bit with writing, downloaded pictures…. All the makings of a lazy day. So far so good.

Over the last few years or vacation rentals I have learned that on Day 1 of grocery shopping, no matter what, you pick up a bag of soup or two. Yes, the dried kind, and I know it does not sound appealing or even practical. But it is. And they might go unused, but, you never know when you might just need to cook an emergency bowl of soup because you either got sick, all the stores turn out to be unexpectedly closed, a second universal flood has been unleashed, or you are just too lazy to go out.

So we yeah, we had Knorr Cream of Porcini with our leftover green beans and leftover tortellini. Maybe it was just because it was almost noon and I was still not wearing a bra, but it was heavenly.

I magnanimously told C that if/when he wanted to go somewhere, he should just let me know, or otherwise I would spend the day happily writing or knitting. Entirely up to him.  Magic words.

By 3:00pm all his emails and newspapers were read and he started to get bored (no TV in this apartment). Finally he said ‘why don’t we go over to Campo di Fiori and have a drink’.  Music to my ears. 15 minutes later, we were out the door. I’m a low maintenance girl.

I think People Watching does not get better in Rome than Campo di Fiori/Piazza Navona. Perhaps the Fontana di Trevi or the Spanish Steps, but at those places there is nowhere to watch the people from. So yeah, we spent about 2 hours and a few glasses of wine watching people take crazy selfies, try to get waiters to rearrange tables for groups of 8+ and oblivious toddlers learn how to walk. 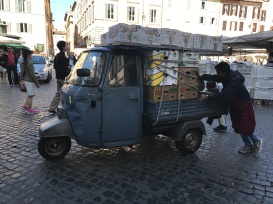 Around 6:00p it was time to move on. As we walked out we went into some of the food stores around the Campo. Everything looked delicious but we held firm; one should not overshop at expensive stores. Then I saw him looking longingly into a fridge display. They had some Cervolats; a typical Swiss sausage that are not easy to find.

The struggle was real. I could see it in his eyes. He wanted them. He just could not admit to it. ‘Honey, why don’t you just get them, it’s ok if we are in Italy.’ I finally said, trying to put him out of pain, Because I try my best to be a good wife. AND those things are good with a little mustard on them. He finally gave in and bought them. 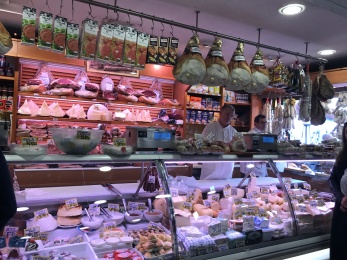 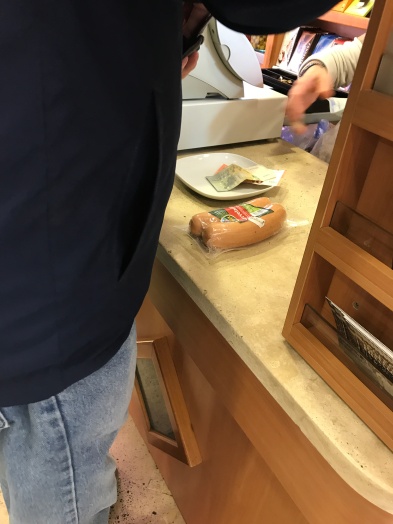 Then it was time to decide what to do… walk around some more or head to ‘our’ neighborhood bar back in Trastevere for one more round. Well, our Lazy Day commitment was kept. We even skipped the bar and went back to the apartment, kicked off the shoes, poured some more wine and cooked a dinner of bacon, smoked pork chops, boiled potatoes and green beans.

Because it’s not always all about what is typical and authentic of the area, sometimes it’s also about what it is available that we don’t have at home and about what makes YOU happy. My Swiss Guy was ecstatic, and we did, indeed, have a Lazy Day.