Having had our lazy day, all items remaining in The Spreadsheet required some degree of effort. The original itinerary said that today we should get away from the Sunday Crowds and do a day trip to Villa d’Este in Tivoli. But I was not quite feeling like it.

After shuffling the alternatives I could not really make up my mind. So I ran the choices by C. ‘Have we ever been to Roman Catacombs?’ He asked. Nope. ‘O kay, then let’s do catacombs.

But even narrowing down that much, there was still an ample choice. Go to the Via Appia and do the traditional tour? That would be ok. But then there was the other option, the more obscure one, the Catacombs of Priscilla. AND I would get two see two other nearby sites I was interested in; Chiesa di Sant’Agnese Fuori la Mura and the Mausoleo de Santa Constanza

But first we had to get over there.

I’m absolutely loving Trastevere. Having said that, it does not seem to be the most convenient for public transportation. I might be missing a few things as a newcomer to the area. I will admit that I had been a little skeptical of the rave reviews of staying in Monti because of its proximity the ‘biggies’ but now that I know that you only need to step one street off from the main drag to find yourself in a completely different city, I would seriously consider it.

So we took a taxi to the train station. This was a bit of an experience. The area around the Campidoglio and the Vittorio Emmanuel monument were partially closed to traffic because they were having a big parade; part of Rome’s birthday celebrations. The streets were filled with hundreds of gladiators, vestal virgins, senators in togas…. Cosplayer heaven. Nightmarish for taxi drivers.

Our driver was half an inch away from succumbing to road rage. There was a lot of rapidly mumbled cursing in Italian. He stepped full on the gas just to have to slam the breaks 10m further. Add the cobblestone jarring. Not exactly my definition of fun. But we made it, 12€ and almost 35 minutes later.

We bought our bus tickets and waited for #92 that would take us past the Borghese Park into a very (very!) nice residential area of Rome next to the Ada Park. After maybe 20 minutes were knew we were getting close so we asked the driver. He told us to wait. Then he was nice enough to point out the correct ‘fermata’ (bus stop) to get out, the obviously named ‘Priscilla’.

After a false start reading the map (not the first one of the day!), we made the short walk to the entrance of the Catacombs of Priscilla. Lucky enough, the next English tour was starting in only 10 minutes. No photos allowed and policy strictly enforced.

Only guided tours allowed and the reasons are obvious 30 seconds after walking into the underground. Even with some signage, it is a labyrinth down there extending several kilometers under the park of Ada. I have a pretty good sense of direction (the navigational glitch later today had nothing to with being lost!)

These catacombs were built (dug?) on the large property of 2nd Century, ultra rich, Christian land owner Priscilla. This burial site was never secret because it was outside the walls of Rome. Did you know that the illegal part was ‘burying’ bodies (as opposed to cremating according to Roman custom) inside the city walls? I didn’t. The tour guide was quite informative, though his English was a bit hard to understand, especially for the non-native speakers in the group (French and Swedes).

We got almost everything because we were ‘listening in Spanish grammar’, if you are bilingual you will understand this concept. Once he realized I spoke Spanish he took off and ran with it to answer my (many) questions. We spoke very well.

C starts with his disaster scenarios, ‘what if there was a power failure and we were left in the dark?’. Was quickly cut at the root, ‘Honey, I don’t think all these people want to hear that right now’. Said while I had just been thinking of all those earthquakes which have struck in Italy recently….

I openly admit to being a sci-fi/fantasy fan. I have seen a lot doomsday and outer space movies. The instant I stepped into the catacombs I kept thinking of the visuals in the original Alien movie, and then of The Matrix, and then all the movies with beehive-like niches with gooey beings clawing their way out of their coccoons…. Which I guess were all inspired by the catacombs. But I mean this totally in a not-scary way. My mind works in weird ways, I know.

In case anyone is wondering, the passageways are wide enough to not feel claustrophobic at all. And the air is not overly musty or stale; I’m often bothered more by air quality than by enclosed spaces.

Having said all that, I loved the experience and so did C. The frescoes contain the oldest known depiction of the Madonna with Child. In the chapel of the Taking of the Veil a woman is shown in three stages of her life: getting married, having a child, and in prayer. One of the other chapels also has one of the oldest Adoration of the Maggi.

In our opinion and personal tastes, this visit was worth the time, the effort and every penny of the very reasonable €8 entrance fee and cost of transportation. Loved it.

Have I mentioned that we navigate the old fashioned way? Well, yes, we still use maps. I don’t get data plans when we travel (though I might soon give up and do so). So I’m going to our next destination using the 2”x3” map on the Michelin Green Guide and trying to match with the one ‘good’ map or Rome I carry around.

The only problem was that the text in the book said Via Nomentana (in font 1.5) and I was looking at Via Nemorense (in font 3) on the other map. A lot of unnecessary walking followed. But it was a nice neighborhood to ‘wander’ around in.

Once I realized that we were in the wrong road, we soon made our way to the Chiesa di Sant’Agnese Fuori la Mura where several babies were getting baptized. I love walking into these events and see the gorgeous baby dresses, the women dressed to the nines and the men wearing those perfectly fitted suits.

The church itself contains an interesting 7thC mosaic in the apse, and the rest of the interior is mostly a 17thC restoration. The crypt was close and when we inquired about the catacombs the attendant stopped just short of saying that if we had just been to Priscilla’s there was nothing for us to really see in Sant’Agnese. We thanked her for her honesty. 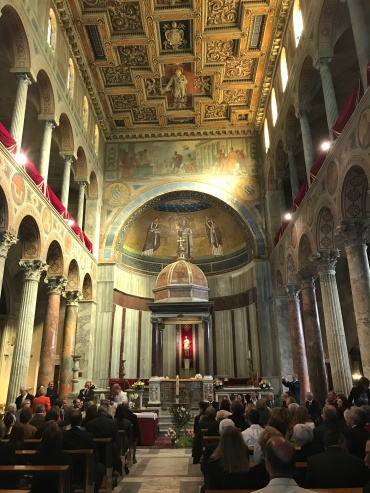 But the real jewel is a little further uphill, within the same complex. The Mausoleo de Santa Constanza. This 4thC circular tomb was built for the daughters of Emperor Constantin, Helena and Constantia. Though it was converted into a church in the 13th C, the mosaics that cover the apse ceiling are the original 4th and are in exceptional state and of marvelous quality. To me, absolutely worth the detour. To C, a bit too much walking. 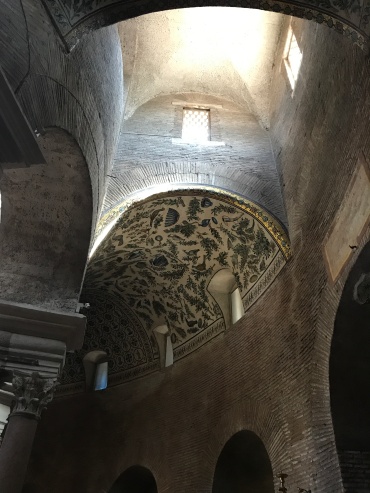 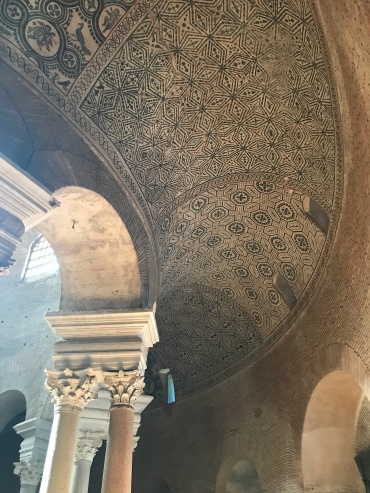 And it was beautifully decorated for a wedding, extra bonus points.

C, being the smart and observant man that he is had spotted bus signs next to the Annibaliano metro station (200m away from the church). We were happy to see that we did not have to walk all the way back to Priscilla to catch the bus, but instead we could just take the #80 to Piazza Venezia. His morale improved instantly.

From Piazza Venezia we walked into the Church of San Marco for a quick peak (also set for wedding) and boarded the #8 tram to the Trastevere, getting off at Via Lungaretta; just a 3 minute walk back to the apartment. Not bad, not bad at all.

We went straight to ‘our regular’ bar for €3 Aperol Spritzes with chips and then retired back to the apartment. Dinner was steaks and risotto from a bag (!) which turned out to be pretty good when enhanced with real cheese and a dab of butter and perhaps more that a single bottle of nice Chianti on the side. 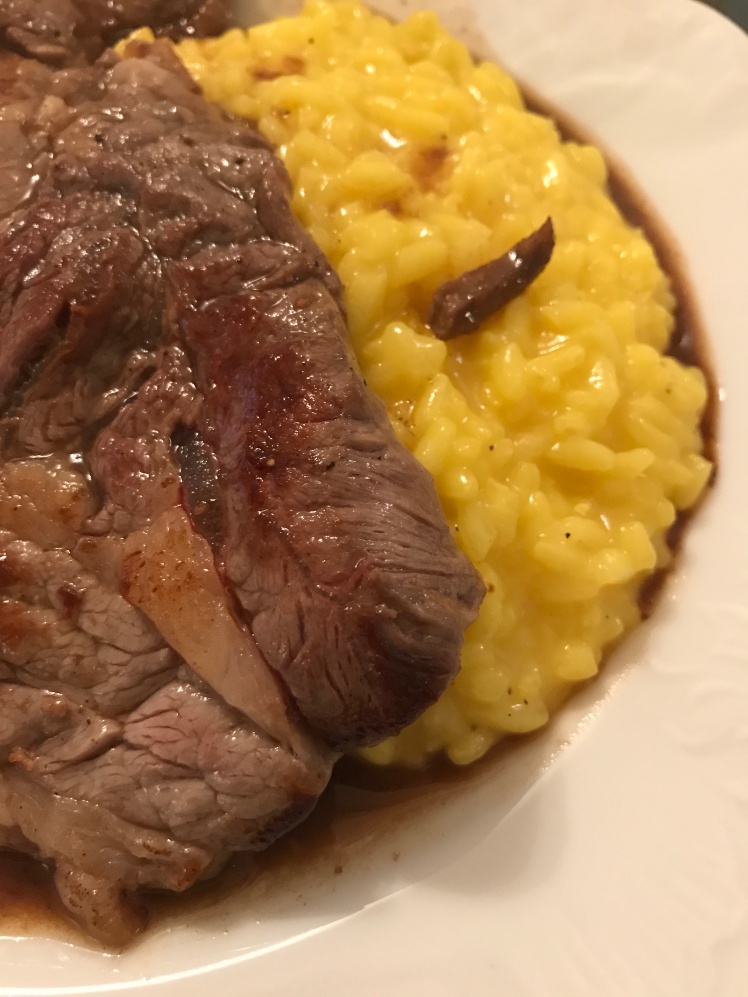