I was afraid to look out the window. We had heard the wind blow outside for most of the night and it was not bright sunshine sneaking around the edges of our not-fully-closed blackout shutter. Sigh. The sky was whitish gray and we could see the waves rolling even from our perch on the hill. 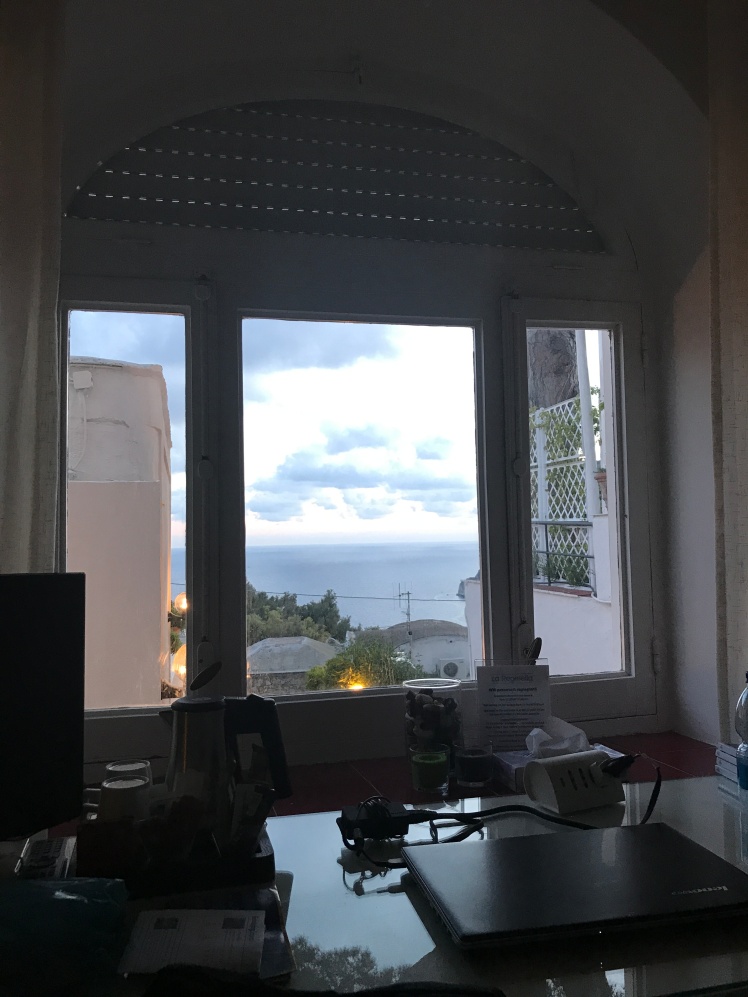 I just knew it wasn’t looking good for the Blue Grotto. This could not be happening.

The B&B put out a great breakfast buffet with plenty of homemade cakes and tarts but also a good selection of savory items. We lingered over our second cups of cappuccino, hoping to see the sunshine breakthrough. The hotel manager made the call.

– ‘But will they open later in the day?’

– ‘We can try later if you want to, but it seems very unlikely.’

Clearly meant as ‘if you want to keep holding on to that torch, fine, but you are going to burn your fingers.’ But yes, I held on to hope as we set out to find our way to Anacapri (which is closer to the Blue Grotto anyway so at least it was heading in the right direction…).

We bundled up (because the wind WAS blowing and way cooler than I would have thought for this part of Italy in May) and walked down to Capri town, through the piazzetta and found the bus station behind the Furla store.

‘There are two ‘Mamma Mia!’ roads on the island, the first is Via Vittorio Emmanuele III where all the High-End stores are and husbands faint when they see the pricetags, and the second one is the road to Anacapri. Sit to the right of the bus if you want the views or to the left if you are afraid of heights.’ said the B&B owner as we left.

We managed to grab seats to the right. We have driven through a lot (A LOT!) of small roads with precipices without barriers but this trip was still an experience. There is also big difference on perspective when you sit higher on a bus and can see straight down. ‘Mamma Mia!’ indeed.

Can’t wait to tell you about the bus from Amalfi to Ravello… THAT was an experience!

Anacapri is the ‘other’ town on the island. I don’t know where I got the impression that it was not a great place to stay overnight, but if we ever return, I would not hesitate to stay in Anacapri.

Given that we do not really have the funds (or driving desire) to rub shoulders with the well-heeled and beautiful people of the jetset world, I actually think that Anacapri would have been a better match for us.

The weather report promised a break in the conditions later in the afternoon, so instead of heading straight to Monte Solaro we opted to go wander around, of course I was buying time still hoping for a miraculous turnaround of the weather and we could still go see the Blue Grotto. 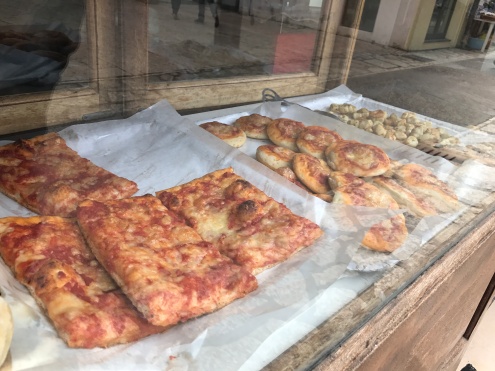 First stop was at the inconspicuous-looking-from-the-outside Chiesa di San Michele and had a jaw dropping moment when I saw its astounding floor covered with majolica tile depicting the garden of Eden. 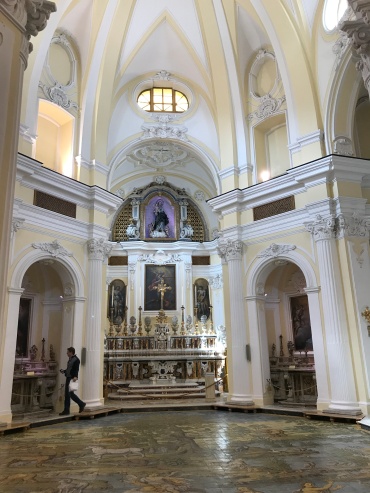 We even went up the spiral stairs to get the full view from the choir on the upper floor.

I have not mentioned this before in this TR but… it will become very pertinent in a few paragraphs.

I have an issue with heights. It started in childhood and became paralyzing by the time I was an older teen. I also have depth perception issues. During my mid-twenties I made the choice to work on overcoming this fear. Hard. Unrelentingly. At this time in my life (I’m 48), most of the time it is just an uneasiness that I know I can overcome.

Unless there is strong wind. That still freaks me out. For example, crenelated castle ramparts are NOT my favorite things. Also what I call ‘transitions’; as in stepping from one stone to another or starting down a flight of uneven. I still get a little sweaty on those. But most of the time I suck it up and just do it.

To my surprise, working out with strength training and balance techniques has also helped tremendously. I guess knowing your body and having more confidence in it makes a huge difference. Ok, back to the story now…

So yes, I went up and down the stairs with barely a ‘bleep’ of difference on my heartbeat. Yay me!

Our next stop was Villa San Michele. We had to ‘endure’ walking through the souvenir shops on Via Axel Munthe but at least the displays of lemon-themed ceramics and general kitsch were artfully arranged and visually pleasing. What is up with the sandal makers?!? Does every single person in Capri buy a pair of the ‘handmade’ sandals? There were thousands of those things.

Have I mentioned that I’m not a shopper? Well, I’m not. We spent 7 weeks in Italy and did not buy a single non-edible or non-drinkable thing. Well, with the exception of an external hard drive to copy our pictures as the ‘laptop ban’ loomed over our return trip.

Villa San Michele was the home of Swedish Doctor-Writer-Collector Axel Munthe. He bought the property in the late 19th century and proceeded to convert it into one of the most beautiful garden houses I have ever seen. It was built over one of Emperor Tiberius’ villas and is adorned with copies and originals of classic Italian antiquities.

The fact that it is perched 300m at the very edge of a cliff overlooking the endless ocean, adds –ahem- significantly to its charm. Even on a grayish day like the one we had, it was worth every single penny of the €8 admission fee. And the garden was not even at its peak. Still, one of my favorite places of the entire trip. 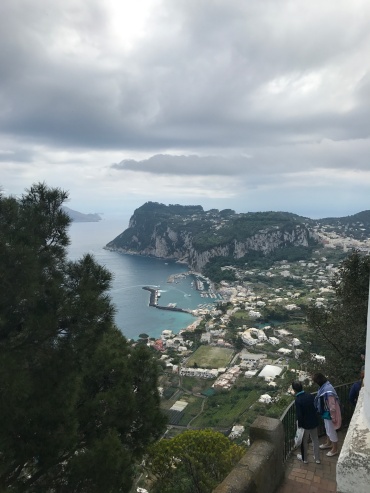 Unfortunately it was crowded as every single tourist that could not go to the Blue Grotto seemed to be there. Still… Wow! 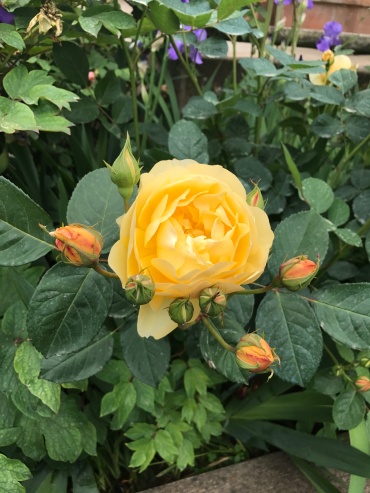 The next thing up on the list was finding the entrance to the Monte Solaro cable car. Its location is quite obvious, but I must have been filtering it out… and for a reason. This is not a cable car. It is a chair lift.

The kind where you seat on a little bench, a guy pulls a ‘barrier’ in front of you so that you don’t fall out (yeah, of course… what if you faint and slide under?) and off you go into the summit with your feet dangling into the gaping void beneath you.

See? This is where that fear of heights story becomes pertinent. A frigging CHAIRLIFT!?!?! And this is NOT a 30-second ride over in the blink of an eye. But I WANTED to go up.

The nice little drink we had before probably helped some. BTW, these things are addictive!

Truth be told, it was not even that bad. Just sweaty palms and a dry mouth. And the views are spectacular indeed. From the top you can see all around the island, the faraglione and the Arco Naturale.

Once you are up there, there is no other (sensible or practical) choice but to get on the chairlift again, so there was not much hesitation.

The ride back to Capri was not as exciting as we were pinched in the crowded (full-body contact. Yuk!) bus.

We started looking at several dinner options from the recommendations we had as we like to ‘scout’ the potential restaurants beforehand.

A few places had interesting options in the menu but C was NOT looking forward to walking uphill with a full stomach and significant alcohol levels in the bloodstream. We agreed that we would just go back to La Palette next to the hotel and looked no further.

Once that weight had been removed from his shoulders (stomach?) he as a much happier camper and was game to exploring further.

We made it down to Augustus’ Garden. Oh My! Just when you think that the island has shown you the best views it possibly could, you turn a corner to find another that sets the bar even higher. 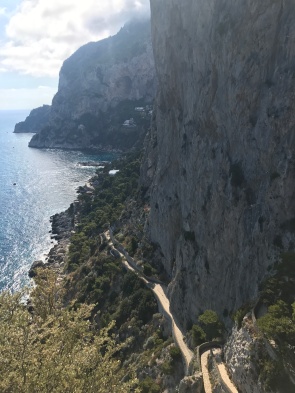 It is also a great spot for people watching taking stupid selfies. A few of them make you wonder about the odds for survival of the human race.

On the way back, C opted for the ‘shortcut’ to go back to the hotel. And it was a shorter distance. If you disregard elevation gain. Huff, step up, puff, step up again. Well, we got to see some of the residential ‘streets’, he survived the ascent, and we made it to the hotel to relax for a while until it was time for dinner.

It was blowing and cold so sitting outside to enjoy the view was out of the question. Sad.

Dinner started with complementary prosecco and an amouse-bouche of a fried dough cheesy thingy which was delicious. 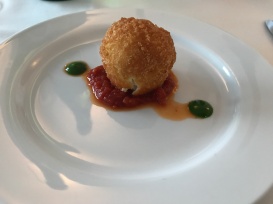 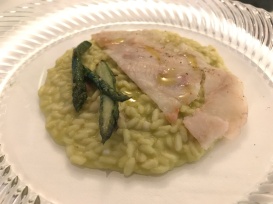 For primi we shared the asparagus and herring risotto which was excellent. Since we said when ordering that it would be sharing the plate, it came already served in half portions from the kitchen, something which I always appreciate. The texture was wonderful and the flavor was exquisitely delicate.

For secondo C had the grilled lamb chops. He gnawed on the bone unashamedly. Need I say more? He did give me a taste of the meat so I can attest that they were beautifully rare and perfectly seasoned.

I had a tuna trio. This was one of the daily specials so I did not read a description, and I made my decision based on the verbal description. Something was lost in translation and I was not expecting a composed dish, but luckily for all, it worked out.

First let me say it that 2 out of the 3 were superb: the tartar and the seared. Potentially one of the best seasoned tuna tartar I’ve had. The seared tuna was of top-notch quality; incredibly flavorful. The third one, fully cooked tuna with capers and tomatoes was very good but for my personal taste, not to the level of the other 2.

I would walk up to this restaurant just for either the Lamb Chops or the Tuna (Duo) on any given day.

And we ended our Blue Grotto-less day on a very happy and satisfied note. I still had to make the decision in the morning, should the weather gods cooperate: visit the grotto or give it up and continue to Amalfi so that we could visit Ravello in the afternoon…

Notes from Tuesday, May 2nd