We started our day in the town of Amalfi and made our way to Salerno via ferry boat without much effort. Forget buses, trains or taxis; boats are the way to move along the coast. 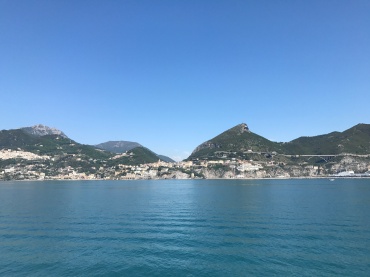 The Europcar office was a 3-minute walk away from the dock.The rental car package I had selected included basic insurance (Thank You Lord!!!!!!!) so we were spared the 45-minute sales pitch (and $15K hold on the CC) we have had to endure in the past when we have rented from AutoEurope without subscribing to their insurance.

Within an hour of disembarking we were driving away from Salerno. I had read this is one of the most underrated cities in Italy and I have to admit that the small part we saw, looked quite nice indeed. In my theoretical trip redo I would spent at least a night in town.

The road from Salerno to Paestum is one long, straight shot. Though it is close to the ocean, we barely caught glimpses of it as the view is obstructed by thick vegetation and it is not scenic at all.

It is a very heavily trafficked and it is what I call, in no uncertain terms, a Hooker Road. I have flip-flopped many times wondering whether I should mention this or not. But it made such a big impression that I will go ahead and write about it.

19 years ago, during our first trip to Italy, our very first trip together, we drove into Rome. I was young(ish) and (sort of) innocent. Ok, let’s say ‘not well traveled’ and leave it at that. It was my first trip to Europe as an adult.

My small-island eyes were getting their first glimpse of the Old Country. The food was new and each new bite was full of excitement, the wine was sweet, and the sights had me drunk on their beauty. I was eager to walk the roads Julius Ceasar had stepped on, I wanted to see the arena where gladiators had laid down their lives for glory, I wanted to step under the dome of St Peter’s, to see Michaelangelo’s strokes as God reached out to create Man in the Sistine Chapel. I yearned for the glory of Imperial Rome.

And then we drove into Rome. Yeah….. A few kilometers of dirty, ugly, and dilapidated warehouses. Don’t do this on your first trip. Or ever really.

If you have driven through the industrial outskirts of any big city, you know what comes along with these sparsely populated yet heavily trafficked areas: scantily or brightly clad girls sitting around on plastic chairs or pacing a corner strutting their stuff in hopes of attracting a trucker to make their day.

Over the years we have road tripped together, C and I have driven through quite a few areas like that and now it takes a little more to get me to do a double take.

Well, the coastal road from Salerno to Paestum, our destination for the day, turned out to be the epitome of all Hooker Roads. Almost 10 kilometers of non-stop ‘girls’ of all ages, colors, ethnicity, shapes and sizes. And they are grouped accordingly. They start with the ones that you actually wonder if they are just teenage schoolgirls waiting for a bus. Until you realize how many they are and how they are spread out at regular 30m intervals and they all stand next to a ribbon bow to mark their spot. I found it heartbreaking to see these young teens resorting to prostitution.

Next along the road were the 20-somethings. Most were dressed like local which were on their way back home from work at a restaurant or shop. No skimpy clothes whatsoever. The young women were mostly Caucasian on this stretch.

The pretty darker girls followed. Then the clothing got skimpier. The heavier ones in all shades were up next. Then really heavy ones. At the end of the stretch were the ones that look like grandmothers that just finished rolling the pasta for the evening meal and are still wearing their flour-stained housecoats.

I believe in legalization and regulation of prostitution; I’m not a prude. But wow. This drive was enlightening about the conditions and hazards that street girls face. I will have more to say about this further along the trip report when we drove through remote agricultural areas.

But this is supposed to be a travel-related post; back to the story.

In The Spreadsheet I had included a stop at a buffala mozzarella cheese maker. When I mentioned this to C, he looked at me like I had suddenly grown a horn in my forehead.

‘I’m Swiss. Why would I want to go to a cheese manufacturer? We did that in kindergarten. But if you really want to go…..’

Ok. Scratch that. The day was not going according to plan. Truth is even I have been to a few cheese producers in Switzerland. And I don’t love mozzarella, even the good one. We kept driving. I was in a funky mood anyway.

The area around the archaeological site of Paestum is all beach resorts. The kind with golf courses. Plural. It was too early to check in into our disappointing-looking hotel so we opted to go into ‘town’ and see the site.

We did not get very far along with the car because the ‘town’ of Paestum, all 2 streets of it, is mostly pedestrianized. But we found a parking spot behind the restaurants across the entrance but we never figured out if we had to pay for it or not. We decided to risk it.

Paestum was a settlement of ‘Magna Grecia’; founded as a Greek colony in 600BC it was discovered in the mid 1700’s by the Bourbon troops while digging out for a road. The settlement had been abandoned in the 3rd century BC because of malaria.

Before diving in we needed a snack and restorative drink. Though this is almost the only thing to see in Paestum, the site is not small. Wear comfortable shoes and do not carry large, heavy backpacks because you have not checked-in yet and do not want to leave your precious possessions in the car.

Our first stop was at the Paestum Museum. We got caught between a large group of ultra-senior citizens and a small bout very loud herd of teens in a school tour. We almost bailed out but I’m glad I stuck it out because there are some incredibly interesting friezes, frescoes, and artifacts exhibited. If you ever get a chance, go see it. 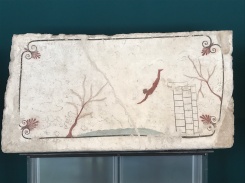 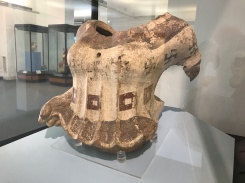 I could talk for hours and write countless paragraphs singing the praises of the Greek ruins in Paestum. I won’t. Let’s just say that after being 3 weeks in Greece a few years ago and doing some heavy-duty ruin visiting, the temples in Paestum were the best classical edifications I have ever seen given their degree of preservation/restoration.

Maybe I’ll just mention for any architectural history fan that this is the perfect site to see firsthand the effect of ‘entasis’ -the purposeful distortion of column width to compensate for eye perspective- in the Temple of Hera.

And the best thing about them? You can still walk inside the temples!!!!!

There is no cordoned off area. You can climb the steps the same way the supplicants coming to Paestum did in its heyday, you can put your hand against the stone and think of the human that chiseled that block millennia past with crude tools and a lot of skill. You could hug the columns and feel the history of ages embedded within if you heart so desires. Not that such a thing happened. Just sayin’.

Overall we spent about 2 ½ hours in the site. It was time to move the car and check into the B&B where we would be spending the night; Casa Rubini.

At €63 a night, my first thought was that this place was a little over priced. And maybe it was. But there are not many other hotels, B&B’s or guest houses open in early May in Paestum. They do not have parking but there was plenty nearby after the tour buses have left.

The location is great, we even had a partial view of the Temple of Ceres from our window. Later in the season Hotel Nettuno might be a ‘livelier’ place to stay as they have a drop-dead gorgeous garden and a direct entrance to the ruins. I think from Nettuno you could get the view of the other two big temples.

After relaxing for a while we went to Domus Clelia for dinner, recommended by the hotel and one of the few options open for dinner in this 2-street town early in the season.

I had a traditional southern Italian dish I had been looking forward to try: pasta with garbanzo beans and potatoes. I liked the taste very much but had textural issues with it. I would need to sample this dish a few more times from different cooks to see if I really like it or not. As a second course I had a perfectly cooked fillet of codfish.

This is where C started to go off the deep end with southern cuisine. His pasta, made with a thick variation of spaghetti in a clam sauce, tasted very good but the strands were stiff enough to act as propellers anytime he tried to roll it on his fork. The fact that there was a heavy dose of (good quality) olive oil in the sauce did not help either. Though he thought the flavors were right, he did not enjoy the dish.

I was happy to have visited Paestum. But furthermore, there is one big reason to stay in Paestum overnight; or at least past sundown: the ruins are beautifully illuminated in the night.

For a lover of antiquities/classical architecture, Peastum would be a destination trip all by itself. I loved it. Even C liked it.